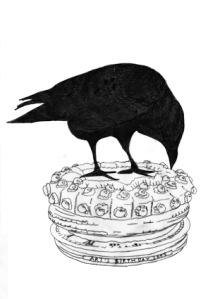 George Brecht (August 27, 1926 – December 5, 2008), born George Ellis MacDiarmid, was an American conceptual artist and avant-garde composer as well as a professional chemist who worked as a consultant for companies including Pfizer, Johnson & Johnson, and Mobil Oil. He was a key member of, and influence on, Fluxus, the international group of avant-garde artists centred around George Maciunas, having been involved with the group from the first performances in Wiesbaden 1962 until Maciunas’ death in 1978.

One of the originators of ‘participatory’ art,  in which the artwork can only be experienced by the active involvement of the viewer, he is most famous for his Event Scores such as Drip Music 1962, and is widely seen as an important precursor to conceptual art.

The New Music ensemble “die reihe”, founded in 1958 by Friedrich Cerha and Kurt Schwertsik in Vienna, has since that time offered chamber music programs of all stylistic orientations, serving as champions particularly of the legacy of the Second Viennese School: the works of Schoenberg, Berg, and Webern. Since the early 1960s “die reihe“ has not only presented its own concert series in Vienna but has been invited to the foremost international festivals of avant-garde music: the Berliner Festwochen, Holland Festival, Warsaw Autumn festival, the Styrian Autumn, the biennales of Venice and Zagreb, musica viva München, Neues Werk Hamburg, and Musik der Zeit Köln. Since 1983 HK Gruber has been the Artistic Director of the ensemble, which is comprised of members of the Vienna Radio Symphony Orchestra.