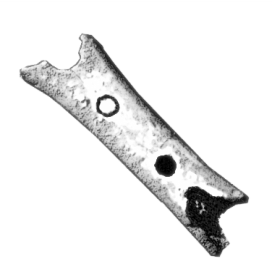 In a small cave 50,000 years ago, a stone age man, most likely a Neanderthal, apparently drilled three identical well-considered holes with a stone tool in the thigh bone of a young cave bear and from the resulting object enticed a simple melody. With the sounds that reverberated through the cave he is thought to have crossed the border between animal instincts and higher consciousness, thus paving the way to creative spirituality. This apparently took place in the cave Divje Babe I, beneath Šebrelje in the Divje Babe Archaeological Park. The cave is therefore frequently referred to as “the cradle of world music”.  Even today among scientists there is no consensus as to whether the so-called “Mousterian flute” is actually the work of human hands and whether our distant ancestors really used it as a musical instrument, but there is room for speculation.

In the composition di-ba baab, di-ya beu the Mousterian flute is joined by an instrument with roots in the much less distant past; the origins of the accordion coincide with the beginning of the industrial revolution, while contemporary modifications have had a decisive influence on the instrument. The sonic picture is completed with the electronic paleosylator (a sample-oriented simulator of proto-attempts of speech articulation) and by means for the electronic treatment of sound.