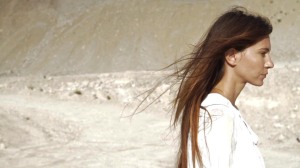 THE LINE PROJECT
The experimental composition “Gdje povlačiš crtu (Where Do You Draw The Line)” was performed for the first time on the Ars Acoustica program on the Third Channel of the Croatian Radio. While a mantra-like base beat pulses through an instrumental improvisation, boundaries are questioned. Where do you draw the line. The issue of boundaries is being raised both on the personal level and the level of society as a whole. Which compromises not to accept? Which actions to react to? Is there any criterion at all that would make that judgment possible? Where lies the boundary of a composition? Of an action? Of a non-action? The question of the line is the question of identity and integrity. And the line is anything but clear.
So there is no proscribed structure for a composition, just as there are no clear-cut answers to the aforementioned questions. Although it adheres to a certain framework (the line), each performance is in the end a unique product of the moment. Since equal use is made of live music, loops that were shot live and samples prepared in advance, neither musicians nor listeners are no longer certain which performer is the source of which sound. It is precisely in this space of blurred boundaries that the most interesting things are possible – brilliant unexpected solutions, but also a complete chaos. From a subjective perspective of the artist the situation is very similar – life outside strictly defined rules is immensely exciting, but also terrifying. A broader social context adds to the complexity of the situation. A passive surrender? An active fight? We shoulder the responsibility for the lines that we have drawn and for those that we have not. And this is precisely what the performance intends to highlight.

Sara Renar (born 1987) is an artist from Zagreb. With a degree in architecture and urban planning, she makes music that eludes strict genre definitions. She has also written lyrics and music for her two studio albums (“Djeca (Children)”, 2013, and “Jesen (Autumn)”, 2014). She has over 200 festival and solo performances in the region and has worked with the artistic group Montažstroj (“55+” 2012, “Budućnost je sada (Future Is Now)”, 2013, “Mali čovjek želi preko crte” (Little Man Wants To Cross The Line), 2014) and the SKROZ collective (music for the Teater.hr award ceremony, 2015, and “Tesla n’ Twain – Art’s Birthday”, 2016). Her third studio album “Tišina (Silence)” was released in October 2016 and she is currently preparing a USA tour. Lately she has been increasingly focused on experimental music and crossover forms between theatre and stage.

This entry was posted in AB event 2017. Bookmark the permalink.
Loading Comments...