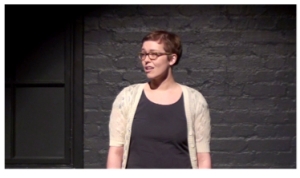 a performance and text written by Marja Viitahuhta (2012)

Several versions of the performance have been made. A new one will be created for Art’s birthday.

She stands in a spotlight, the rest of the room is dark…

Marja Viitahuhta (née Mikkonen, b. 1979) graduated with a degree in performing arts from the Turku Arts Academy in 2003 and from the Finnish Academy of Fine Arts in 2007. Viitahuhta is a versatile and interdisciplinary artist whose works include everything from short films and videos to performance art, photography and installations. Viitahuhta lives in Helsinki and is a mother of a little boy.

This entry was posted in AB event 2013. Bookmark the permalink.
Loading Comments...